A Closer Look At The Elephant 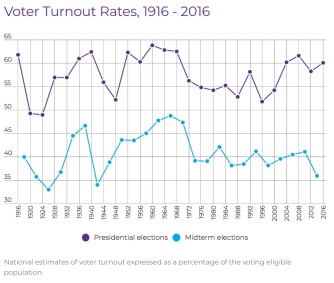 The voter turnout rate for midterm elections — such as the one coming up this November — is reliably lower than for presidential elections. In 2014, only 36% of eligible voters voted, while 64% [144 million] stayed home. Even in presidential elections, turnout averages only about 60%. Think about that. On average, three of every eight people you see when walking down the street never vote, and only five of eight vote on the person who will be their next President.

According to a recent USA Today / Suffolk University poll, people who don’t vote cite several reasons for their lack of participation in this fundamental element of our democracy:

Please note. … If anybody said their reason for not voting was that they think everything is fine with our country and its leadership [i.e., so those who are voting seem to be doing a good job], the percentage was so low that it didn’t make it into the list of reasons the pollsters considered statistically significant.

The Most Powerful People In America?

I could build a pretty good case that these 144 million people who never vote could be the most powerful people in America — and that the second most powerful group of people could be the 72 million of them who only vote in Presidential election years. So to all of them, I’d offer this advice: Wake up! You have the power to change this country to whatever you think it should be rather than leaving that to a minority of people who currently have a much louder voice than yours. In number, you are at least five to six times the largest margin of victory of any U. S. President in our history [61.5% by Lyndon Johnson in 1964 — about 16 million votes]. Since 1820, only four Presidents have received 60% or more of votes cast [a 20% margin of victory], and only nine have received 55-60% of votes cast [a 5% to 10% margin of victory].

To those who cite reason #1, I’d advise them to consider what President James Garfield said: “The people are responsible for the character of their [leaders]. If [they] be ignorant, reckless, and corrupt, it is because the people tolerate ignorance, recklessness, and corruption.  If [they] be intelligent, brave, and pure, it is because the people demand these high qualities [in the people who] represent them.” President James Garfield [bracketed substitutions by me — his remarks were directed specifically at the Legislature, but are clearly applicable to all elected officials].

To those who cite reason #2, I’d advise them to read the history of past elections in which every vote clearly made a difference — most recently, the 2017 election in Virginia for a House of Delegates seat which actually resulted in a tie and was literally decided by the flip of a coin.  At first, Democrat Shelly Simonds thought she’d won the race by a single vote. But the next day, a panel of judges ruled that a ballot — originally thrown out by officials — should be counted in favor of her opponent, Republican David Yancey, making the election result a tie. The ensuing coin toss shifted the victory to Yancey. One additional vote for either candidate would have changed the outcome of that election.

To those who cite reason #3, what can I say — in many elections, you’re absolutely correct! However, President Garfield’s words point the finger of blame to — you guessed it: “We have met the enemy, and he is us,” as Pogo [Walt Kelly] said [a twist on the words of a message from American naval officer Oliver Hazard Perry in 1813 after defeating and capturing British Royal Navy ships in the Battle of Lake Erie: “We have met the enemy, and they are ours.]”

To those who cite reason #4, I’d say, “Name at least five of the many things in the past five days that you found time for and transportation to that were far less important than exercising what is probably the most precious right you have as an American citizen.”

I’ll close with this food for thought: “In the end the ultimate threat to the American republic will be America.  The problem is not with wolves at the door but termites in the floor.” Os Guinness

Thanks for reading this post, and if you regularly follow my Blog, for that, too. Please consider sharing this or other posts with your friends, colleagues and associates.