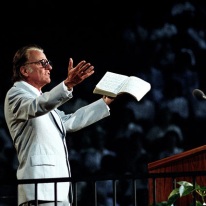 Whatever world or national issue I was considering as subject matter for this week’s blog post is mere trivia in comparison with the news this morning that Reverend Billy Graham has died. I consider myself fortunate that most of my adult life paralleled Reverend Graham’s ministry from its early years to indisputable recognition as far and away the most dominant Christian leader of the twentieth century — a recognition that carried well into this century.

The best-known part of his ministry was the Crusades he led for six decades. I was only nine years old when he led a 12-week Crusade in London in 1954.  His 16-week revival event in New York in 1957 drew tens of thousands to Madison Square Garden. His last Crusade in June 2005 in Queens, New York, drew a total of 230,000 people. I watched his televised Crusades throughout my adult life, and attended one in Baton Rouge, Louisiana in 1970.

Reverend Graham’s influence, historians say, was monumental. Some called him “America’s pastor.” Others referred to him as the “Protestant pope.” He is reported to have led more than 3 million people to commit their lives to Christ, and his preaching was heard in 185 of the world’s 195 countries. “No more than one or two popes, perhaps one or two other people, could come close to what he achieved,” said William Martin, a former historian at Rice University and the author of A Prophet with Honor: The Billy Graham Story.

The image of a televised Billy Graham Crusade is probably an indelible part of the recollections of millions of people my age and younger, and two other members of the four-man leadership team that made those Crusades what they were — Cliff Barrows and George Beverly Shae — would be a part of that image. The other member of the team, behind the scenes but no less important, was Grady Wilson, who was essentially [whether so titled or not] the “Chief Operating Officer” — the man who managed the massive operational and logistical side that is so necessary in a ministry of that magnitude.

For a man of his stature, Reverend Graham was a humble man who would always point people heaping accolades on him to Jesus Christ as the One toward Whom any recognition should be focused. Some accounts of the unveiling of a 9-foot bronze statue of him in Nashville indicate that he was uneasy about that event. In 2016, after sale of LifeWay Christian Resources’ property where it stood, the statue was moved to LifeWay’s Ridgecrest Baptist Conference Center near Asheville, NC, just a few miles from the home where Reverend Graham lived most of his life. “It will welcome nearly 70,000 men and women who come to Ridgecrest every year for spiritual training and retreat,” said Thomas Rainer, LifeWay president and CEO at that time.

When asked what he’d like people to say about him when he died, Reverend Graham said, “I want to hear one person say something nice about me and that’s the Lord, when I face him. I want him to say to me, ‘Well done, thou good and faithful servant’” [see Matthew 25:21].

My feeble attempt in this post to pay tribute to a man who was one of the most positive influences on my life will be just a small drop in a very large bucket of writings about him today. But to him, nothing in that large bucket can compare to the one thing I am certain he heard this morning: “Well done, thou good and faithful servant.”