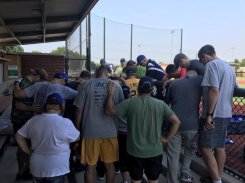 I opened last week’s post with this heading: What Do We Need To See, Hear or Read Before We Say “Enough!”? [see that post at this link: Are There Any Limits To Anything Anymore?].  Well, I think we’ve seen it today.

In that post, I referenced the vulgarities and vitriol spewing out of the mouths of Mss. Ciccone [Madonna] and Judd in their speeches at the 1/21/17 Women’s March, and Stephen Colbert’s 5/2/17 “comedy” monolog — and even worse, Kathy Griffin’s stupid social media posting of a photoshopped mock-up picture of herself holding a bloody severed head of President Trump.

Today, in a lunatic’s shooting rampage aimed at Republican members of Congress practicing for tomorrow’s annual Democrat-GOP baseball game for charity, four people were wounded, including a sitting United States Representative.  If you can imagine something possibly worse, consider what might have been the result of that rampage absent the quick thinking and heroic response of Capitol Police officers who were there. Almost all the media outlets and several congressmen/women interviewed observed that the rampage could easily have been a massacre of dozens or more of these Representatives. And … had Congressman Scalise [the injured Representative] not been there, these officers would not have been there because they were a part of his security detail [he is the Majority Whip, the third highest-ranking member of the House].

Are We Actually A Republic [i.e., A Representative Democracy]?

Not to wax philosophical, but there is more to this than meets the eye.  Philosophers tend to get into too much detail and offer too many optional views.  The way I see it, there are basically three main forms of government: democracy; republic (representative democracy); and totalitarianism. Absent a working version of one of these forms governing a population, the alternative is anarchy.

In theory, a true democracy can only work with an extremely small population.  The larger the population, the less practical a true democracy becomes [it would be logistically impossible to get a vote of all the people on every decision that is needed]. America was founded as a republic, a representative democracy. At a rapidly accelerating rate, our government is exhibiting many characteristics of totalitarianism [movement toward more central control, expanded powers of elected officials].

So why would I mention all this in the context of these acts of disrespect and even hatred — and now actual homicidal violence toward elected officials? These are manifestations of anarchy. If you think America could not degenerate even further into anarchy, it would serve you well to pay more attention to events like those I referred to above and consider all of them in context with each other.  Perhaps an even more enlightened perspective could come from considering all them, in context with each other, and in context with the history of nations of the world over centuries. The logical answer to the chaos that anarchy brings is — you guessed it — totalitarianism.

I honestly hope that somehow, today’s event can be a trigger-point, something that wakes us all up and causes us to realize what we are becoming.  There is a tendency for the “togetherness” displayed immediately after events like this to be short-lived [look at the 2011 shooting of Congresswoman “Gabby” Giffords, or even 9/11, or Sandy Hook, or Orlando, or London, or … ]. The “sting” wears off, and we slip back into our pre-event mentality.

Particularly encouraging to me was the image I used as my picture for this post — Democrats, at their practice for tomorrow’s game, praying for the Republican victims of today’s tragedy. Also, the statements of the President, the Speaker and Minority Leader of the House, and other elected officials all stressed about as much solidarity — without partisan terminology — as I’ve seen in some time.

But, there was some evidence even late today that the “Kumbaya” atmosphere stemming from today’s shooting was nearing this “back to business” status before the evening news broadcasts were over [the “leak” from more “undisclosed sources” that special counsel Moeller is investigating President Trump for obstruction of justice; one of the media outlets was almost completely focused on this “news” during one of its primetime shows].

It’ll be interesting to see what dominates the “news” over the next few days, and whether there is any change in “tone” in partisan rhetoric.

One thought on “Enough Already!”