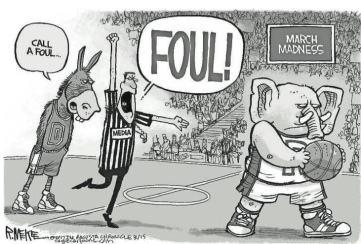 On March 15, President Trump was here in Nashville. Late last week, David Plazas, the Opinion Editor of the Tennessean asked his readers to submit letters to the President for publication the day of the President’s visit. I’m honored that mine was among those that “made the cut” and was published.

According to Mr. Plazas, 160 letters were received. He categorized them as follows: 65 (41 percent) directly criticized the president and 38 (24 percent) praised and welcomed him; supporters wrote that they are praying for him and hoping for his success; critics generally said they want him to stop tweeting and release his tax returns; the remainder consisted of requests, questions and suggestions on a variety of policy matters; the top five issues addressed were the Affordable Care Act and the proposal to replace it, the president’s behavior and his fitness to serve in office, the environment and climate change, immigration reform, and holding Mr. Trump accountable to fulfilling his campaign promises.

Also included in this section was an excellent “Open Letter to President Donald J. Trump” by Jon Meacham, a widely-known presidential historian, contributing writer to The New York Times Book Review, contributing editor at TIME, and Pulitzer Prize-winning author who now lives in Nashville. The letter basically drew from President Trump’s apparent fascination with President Andrew Jackson [the 3/15 visit to Nashville coincided with Jackson’s 250th birthday, and included a tour of the Hermitage, Jackson’s residence, now a museum], drawing both parallels and differences. In my opinion, it was very well written — and should be well received by President Trump if he reads it.

For anyone wishing to see the entire section of the Tennessean referenced above, click on this link: Letters to Trump – Tennessean 2017-03-15.

I’m writing this post to offer some observations about the President’s visit, the kinds of letters that people wrote, and the Tennessean‘s coverage the following day.

Thank you for visiting Tennessee, and welcome to our state! And thanks to The Tennessean for allowing its readers to offer letters to you. Although I voted for you, I would be writing this same letter to Mrs. Clinton had she been elected and visited our state as president now.

I honestly hope that our country can get over the extremely polarized atmosphere that currently exists and move on in two ways: 1) support you as our duly elected president, whether we voted for you or not, in your efforts to do what you promised you’d do if elected; and 2) shift any of our collective energy currently going into protests and demonstrations into planning and executing a strategy to elect somebody else in 2020 if that’s what we want.

That’s the way this country is supposed to operate.

The next-day issue in the Tennessean was VERY encouraging. The overall “tone” was like that for any presidential visit to our state might have been, and the content was focused on what the President actually said, without the ever-present left-skewed bias in phraseology. Although there were references in some of the coverage to what some of the protesters were saying, those references were simply stated as part of the overall “flow” of the text, not magnified and expanded on as is so often the case in the media’s coverage of President Trump these days. In all, 4 of 15 pages in the front section of the paper were on the Trump visit, and only one article in one corner of the third of those four pages carried a headline about protesters — “President’s Rally Draws Crowd Of More Than 2,500 Protesters” [that article was only about 20% of that page’s content, making it only 5% of the total coverage]. Hats off to the Tennessean!

From where I sit, it would be great if there was more coverage these days with the overall “tone” in these two editions of the Tennessean [which, I might add, is a generally very liberal newspaper]. That would indicate to me that the media is finally coming around to realizing that things are not the way they have always been, and that they need to re-think who their readers are [i.e., that a whole lot of people don’t fit into the liberal mindset most of them seem to have].

I realize that there is some risk the other shoe may drop tomorrow, and I may have to retract my kudos to the Tennessean if they have “the other side” dominating tomorrow’s paper — let’s hope not!